You are here: Home / The Short Long Service Leave

It was to be the trip of a lifetime, or so we thought…

My wife Denise and I were to set-off on a bucket list journey that spanned oceans and continents, leaving Perth behind for Dubai, and boarding the ship MSC Splendida to set sail on a 17-day cruise. We would journey through the Red Sea, and onto the Mediterranean – stopping in ports with exotic sounding names such as Khasab, Muscat, Salalah, Aquaba and Rhodes.

Our seafaring adventure would finish in the Italian port of Genoa, where we would trade the Mediterranean sun for the bustling cultural metropolis of London. Denise was enrolled in a week-long fashion course that would allow me, a museum geek, to explore the wealth of rich historical treasures in the city of my birth.

From London, we would continue on, travelling to the south of England where we would pursue the origins of our shared Cornish ancestry – as well as catch up with friends and family. The final part of our dream trip was to head across to Spain and spend a week in Madrid with some friends from Perth, before flying the long journey home.

Denise and I had spent over a year planning every detail. I had also accessed five weeks of my hard-earned long service leave – precious weeks built up over years. Prior to leaving, there was something called Coronavirus that was making daily headlines. Having lived through countless influenzas, that were often named after animals, I thought this was just another one (except it was named after a brand of beer and we had to be more careful with our personal hygiene). How wrong I was!

Denise and I departed Perth on our grand adventure on the 10th of March. When we reached Dubai the rather frightening term ‘Pandemic’ was being used and with it, the situation appeared to escalate rapidly according to the news reports we were receiving online. I knew my earlier assumptions had been wrong and that it was serious when I heard the AFL competition had been terminated and the school was being affected so severely.

The timing of our trip could not have been worse! After having spent two days taking in the sights of Dubai, we boarded the Splendida and departed the port at 9 p.m. Three hours later we were informed that Dubai had closed its port along with most of our scheduled shore stops. It appeared that it was highly likely that our ship was the last cruise ship in the world to leave a foreign port.

The next day we managed to get in one shore stop at Khasab in Oman. Unfortunately, it wasn’t the most thrilling place I’ve been to. Imagine the surface of Mars with a few dilapidated buildings and some stray dogs. We made our way back to the ship, unaware that Khasab was to be the last piece of Terra Firma we would walk on for the next 11 days.

That night, we were informed by the ship’s captain that all shore stops had been cancelled and that our final destination was to be Marseille in France on the 24th March. Much to our dismay we were also advised that we would be entering known pirate waters off the coast of Somalia, and that all passengers disembarking the ship in Marseille were to return to their home countries. So much for our dream trip!

Resolving ourselves to our fate, we tried to make the most of the situation and what the ship had to offer. Fortunately, we had gone on the trip with four other couples from Geelong who we’d been friends with for a number of years. While on board I learnt new card games, mastered the basics of doing the ‘Lambada’, joined a couple of trivia sessions and almost won a podium finish in the putting competition. I did draw the line at making Chinese paper lanterns and macramé in the art classes though!

After about four days at sea the situation began to have a ‘Groundhog Day’ feel about it: get up, hit the buffet for a big breakfast, watch people do exercise classes, walk the deck, look out to sea, sleep, lunch, repeat until 5 o’clock when you would catch up with friends for drinks, a dinner and a show.

Most of our days we were surrounded by ocean – there wasn’t a lot to look at. The highlight of our day would be a passing cargo vessel or spotting a flying fish. As the monotony began to consume our days, to distract myself from the buffet, I decided to conduct a research investigation. The topic: ‘Distribution Amongst Sunbed Locations on the MSC Splendida’.

It was around the time I concluded my research, that many of the passengers began to discover their return flights had been cancelled, due to various countries closing their borders, even if it was for transit only. We had begun receiving texts from the Australian Consul in Paris assuring us that they were working hard to get us home.

Stress levels were starting to rise amongst many of the Australian passengers as there was a lot of uncertainty, scarcity of flights and the real possibility of being stranded overseas for an indefinite period. Luckily, Denise is very well organised and after much stress, managed to secure flights from Heathrow to Doha, and then Doha to Perth. It would take over 40 hours to get home and featured the possibility of spending two weeks in hotel isolation once we returned.

Luckily, as our trip progressed, it consisted more than just cruising in the middle of the ocean, we were travelling through the Suez Canal and the Messina Straights. Even though we couldn’t go ashore, I found these sights very interesting from the ship’s decks.

Many days after we had left the Suez Canal behind, our voyage was almost over as we approached Marseille. The evening prior to arriving at port, we were visited by a large helicopter. It hovered above the decks and delivered medical crew via abseiling ropes – a very military feel that reinforced the seriousness of the Covid situation. Fortunately, there were no confirmed cases on our cruise.

The next day we docked in Marseille, finally on solid ground, we were escorted off the ship by the French Gendarme. Passing through customs, we were placed onto coaches and driven with police escort to Marseille airport where we were informed that two charter planes would be arriving. One would be going to Heathrow for all the Aussies, and the other to Gatwick for the Poms.

An eerie sight appeared before us when we arrived at the airport. It was empty. No airport staff, cleaners, shops, food outlets and no planes! After a couple of hours, the airport departure area had swelled to about 500 passengers from the ship with the addition of a dozen heavily armed and official looking French military personnel. By now it was approaching mid-afternoon and worry started to set in. Our Air Qatar flight was due to leave Heathrow at 8.00 p.m. and here we were still in Marseille with no sign of leaving.

Despite constant reassuring text messages from the Australian Consul, the tension was rising with every minute. The developing scene was reminiscent of footage I’d seen of people fleeing the American Embassy in Vietnam after the fall of Saigon in 1975. Worried they would be left behind, that time was running out.

Out of the blue appeared two chartered jets and with it, airport staff to get us out of France and on our way home. Our final text informed us that they could get us to Heathrow, but unless you had booked flights, you were given a list of hotels in London to stay in instead. The latter didn’t apply to us as we were on our way home!

The transit through Heathrow went fairly smoothly with constant social distancing reminders amongst hordes of foreign students decked out in head-to-toe hygienic gear. We now had 40 hours of travel in front of us (including an 18-hour stopover in Doha).

They say that the world is a pretty small place, and this was proven whilst we were waiting in the departure lounge. A bearded, ponytailed fellow sitting next to me seemed to know who I was. It turned out to be one of our ex LHS students, Geoffrey Power, from the famous Class of 2001. Having a sense of familiarity in a situation like this, gave us reason to smile and laugh. But the amazing situation didn’t end there. Sitting across from us was a young lady smiling at us over the top of her iPad. It was none other than another ex Lance Holter, Darcy Pearson, who left in 2013.

Pretty amazing, two of my ex-students in one place, at the same time, on the other side of the world! Geoff had been teaching English in St Petersburg and Darcy was an exchange student in Helsinki, Finland before the COVID-19 exodus began.

The flight home was relaxing, now that we knew we would soon be in the land that we loved. As it turned out, we would spend our mandatory two week isolation period in our own home, missing the hotel lockup by a matter of hours.

The isolation was OK, with the support of friends and family acting in a domestic UN role with food drop offs and dog walking. We did a few jobs that had been on the backburner for years and ended most days with card and board games up on the balcony.

Upon reflection of the whole situation, the word ‘bummer’ comes up a bit. Sure, we have a number of travel vouchers from various airlines as well as the cruise company, but it still doesn’t make up for the disappointment we both felt. Our dream trip didn’t go as planned, but I guess we’re lucky we both got through it. At least, we can say that our trip was a ‘once in a lifetime’ adventure and we’re part of history. 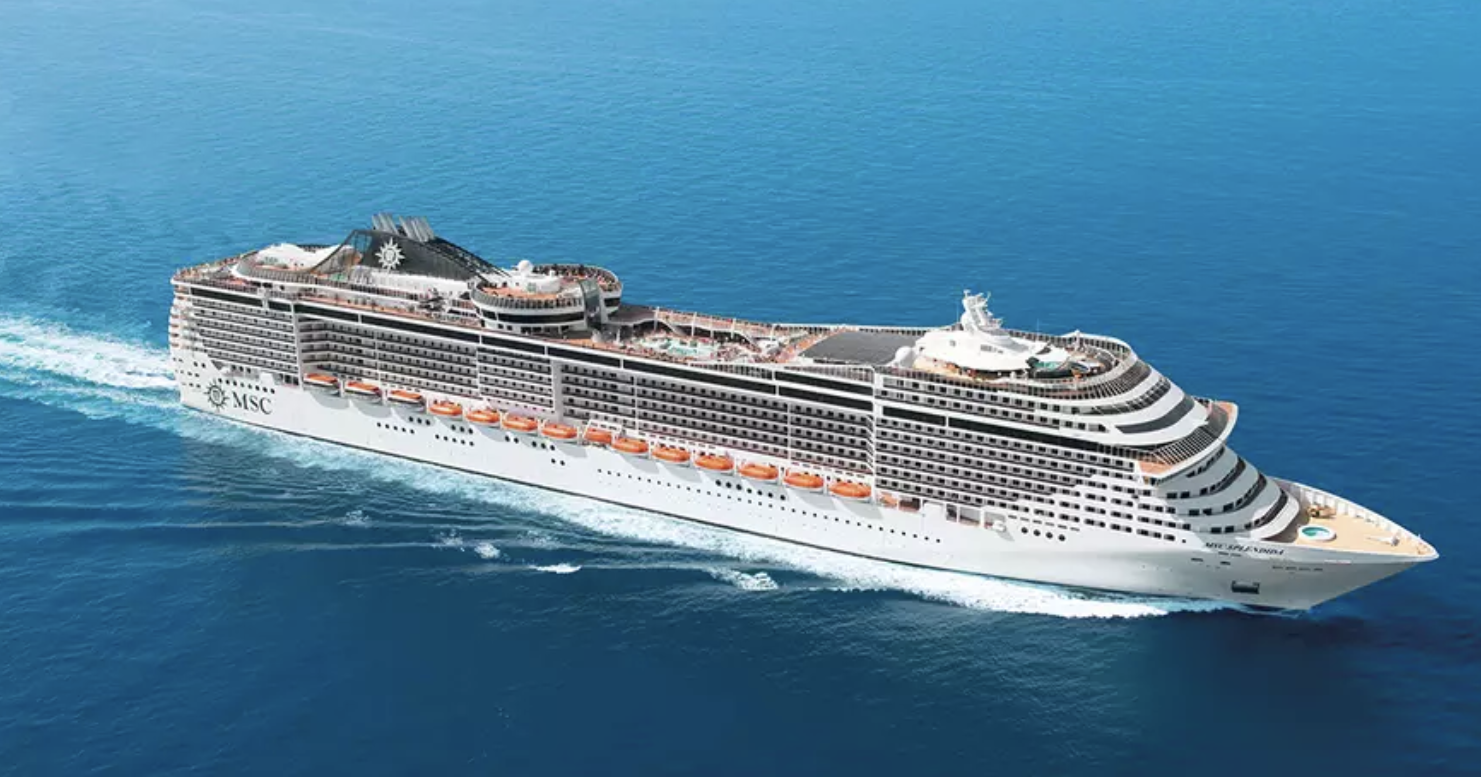